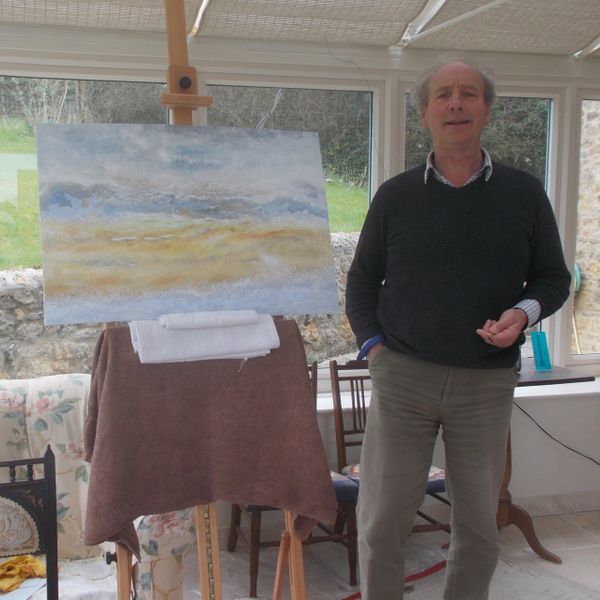 For over thirty years, Dorset-based professional artist, Richard Kennedy, has been creating a wide range of artwork, from rural subjects, to rock music acts (especially Jethro Tull) to Royal Navy warships and, more recently, abstract paintings. Richard's early pictures are pen and ink dot drawings. Later, he began incorporating the tip of a scalpel blade to exact a further level of detail. All are drawn by naked eye only. Each one has taken several weeks to complete, some up to nine months. Most of these highly detailed drawings are available as prints, titled and signed by the artist. Richard is based near Beaminster and many of his rural drawings are of rural subjects in the locality, some featuring his Airedale Terrier, Tess - and also a set of drawings of the Bridport Steam Railway. Three of Richard's original pen and ink drawings of Dorset were accepted by the Royal Academy back in 1991. There are also rural drawings of County Antrim, where Richard had a gallery which was wonderfully positioned at Dunluce Castle. Richard originates from County Down. Richard has enjoyed completing a range of creative and popular drawings of his favourite rock acts, namely Jethro Tull - also Pink Floyd, Free and others. Being of a Royal Navy background, Richard has always had an interest in the Navy - in particular, the notorious World War Two Arctic convoys to North Russia - hence the range of drawings of Royal Navy ships, some of which are to be found used as panels by the Loch Ewe Gallery in the Western Highlands of Scotland. Absolutely removed from Richard's highly detailed drawings is his more recent, ongoing range of abstract original paintings. These are 3D acrylics painted on canvas board over raised surfaces incorporating materials such as bird seed, rice, etc. Areas of abstract painting have always been of interest to Richard and these represent a spontaneity of passion and thought for him.