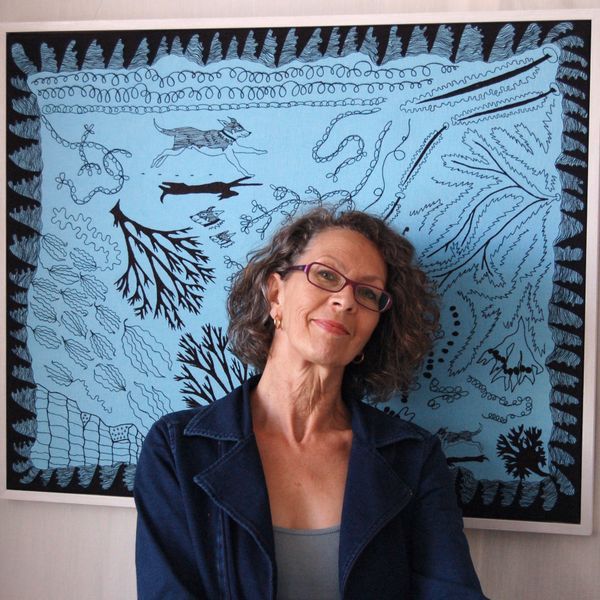 Jenni has worked as a designer maker since leaving Reigate School of Art & Design in 1980 where she trained in Printed Textiles Design. After 12 years working within the applied arts of glass, furniture and interior decoration she returned to the world of textiles and took up stitching in earnest. A turning point early in her career came when she received Craft Awards from the Arts Council South West in 2000 and 2001 and it was during this period that her work began to significantly evolve. She started to sketch the landscape and found not only a new way of expressing herself but the key to developing her own style of embroidery. Her current practice pursues a continuing interest in the landscape and of recreating the painted and drawn mark. Using the mechanical process of machine embroidery she applies threads in broad flourishes and strokes to emulate the painted colours and flowing drawn lines of her works on paper. Jenni’s abstract and figurative textile pictures and wall hangings have been shown widely in solo and group exhibitions including The Devon Guild of Craftsmen, Bovey Tracey, Thelma Hubert Gallery, Honiton, Allsop Gallery, Bridport, Chapel Gallery, Ormskirk, Sussex Barn Gallery, West Dean College, Chichester and the Brighton Art Fair.